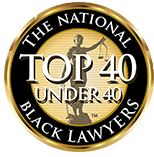 Landrise Felix is an associate in Goldberg, Miller & Rubin’s Northern New Jersey office handling premises liability and motor vehicle cases including third-party bodily injury, uninsured/underinsured, fraud and personal injury protection cases. Landrise has been named to the Top 40 Under 40 list by the National Black Lawyers Association and was named “One to Watch” by Best Lawyers.

Landrise, fluent in Haitian Creole, is a first-generation American who was born and raised in Rockland County, NY by her Haitian parents who emigrated from Haiti and instilled in her a strong work ethic.  Her father and mother, an electrical engineer and a registered nurse, respectively, raised her and her younger brother to have deep-rooted beliefs and values.

She began her legal career as an intern during law school preparing immigrant and nonimmigrant visa applications, including employment and leisure visas as well as asylum, Violence against Women Act (VAWA) and Deferred Action for Childhood Arrivals (DACA) filings and waivers. She also acted as an interpreter for Creole-speaking clients to streamline communication between attorney and client, along with translating official government documents from French and Haitian Creole to English as part of the applications.

Landrise received a Juris Doctor degree in from New York Law School and a Bachelor of Arts in Political Science from the State University of New York at Albany. As an undergraduate student, she was a member of the SUNY Albany Angelic Voices of Praise Gospel Choir and the Phi Alpha Delta Law Fraternity.

When Landrise is not in the office or court, she’s often on a plane traveling to new cities, domestic and international.  She also loves to sing, dance, and crochet.

Landrise Felix Selected by The National Black Lawyers: Top 40 Under 40